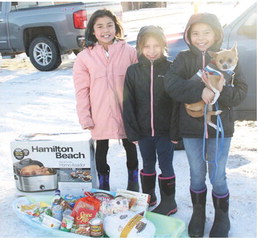 Each participating family received a ham. The first-year event featured a short relay race at each location.