Climate change poses an array of challenges. The National Oceanic and Atmospheric Administration notes that the impacts of climate change on various sectors of society are interrelated, a connection that mirrors the ripple effects of the COVID-19 pandemic. The human health crisis that arose during the pandemic affected all aspects of life, as illnesses limited worker productivity, thus affecting the global supply chain, including the availability of food.

Scientists warn that a similar scenario could play out as a result of climate change. The agricultural sector could face considerable challenges in the years to come. The Fourth National Climate Assessment is a government-mandated report that must be delivered to the United States Congress once every four years. Among the many aims of the report are to provide an analysis of the effects of global changes on the natural environment and agriculture. The report also must project major trends for the next 25 to 100 years. The most recent report, delivered in 2018, noted that changing precipitation patterns could intensify in the coming years, leading to more intense periods of heavy rain and longer dry periods.

Those shifting patterns and other changes could lead to an increase in conditions and weather events that pose unique challenges to the agricultural sector.

Flooding: The Union of Concerned Scientists notes that many agricultural regions of the United States have already experienced increased flooding. The effects of flooding on the agricultural sector are often devastating and include accelerated soil erosion, water pollution and damage to infrastructure that challenges farmers’ ability to get food from their farms to stores and, ultimately, consumers’ dinner tables.

Drought: The National Integrated Drought Information System reports that the primary direct economic impact of drought in the agricultural sector is crop failure and pasture losses. The Government of Canada notes that areas of western Canada are already experiencing frequent and severe droughts, and scientists expect other areas of the country to be affected by drought more often in the years to come. The same goes for the United States, which the UCS notes has already dealt with severe drought in California, the Great Plains and the midwest. Depleted water supplies are a byproduct of drought, and such depletion can take a toll on crops and livestock.

Economics: The effects of climate change on crops and livestock may force farmers to change the nature of their farms. The UCS notes that farmers may be forced to choose crop varieties and animal breeds that are suited to the new conditions sparked by climate change. Going in a new direction could force farmers to make potentially costly investments in machinery and other changes as they make the transition.

Climate change will pose unique challenges to the agricultural sector that could force farmers to make some difficult decisions in the years ahead. 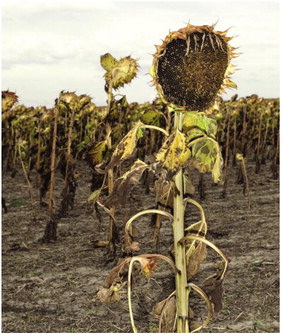