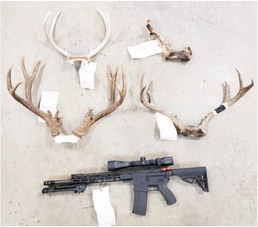 A Shepherd man lost his hunting privileges for 16 years and will pay fines and restitution exceeding $6,000 after pleading guilty to 16 state and federal charges of poaching mule deer and leaving some parts at a federal recreation area.

In state court he was fined $4,405 and ordered to pay the state $2,000 in restitution. He also lost his privilege to hunt in Montana for 16 years. Because of reciprocal agreements between states, he will not be able to hunt legally anywhere in most of the country. In addition, he will pay $400 on the federal charges. Montana Fish, Wildlife & Parks game warden Connor Langel, who investigated the crimes, also confiscated the rifle Reed used to kill the deer.

Reed was convicted of spotlighting and shooting two mule deer bucks on Oct. 2 and taking them to the federal Bureau of Land Management’s Ah-Nei Recreation Area, where he removed antlers and backstraps, then left the rest of the animals to waste. Also that evening, a live tree was cut down and burned and numerous beverage cans were scattered in the recreation area. Damage to the recreation area was investigated by Bureau of Land Management ranger Jeff Herriford.

Reed was also convicted of spotlighting and shooting a third deer on private property, where he did not have permission to trespass on Oct. 8 and taking it to the Ah-Nei Recreation Area, where the backstraps were removed and the rest was left to waste.

Reed did not have a Montana deer license at the time of the poaching incidents, which occurred before the general deer season opened on Oct. 23. Langel later found a fourth deer that Reed had killed illegally.

The case originated with information called in to 1-800-TIP-MONT, the FWP call-in line to report crimes involving fish, wildlife, parks and other natural resources. Anyone with possible information about such crimes is encouraged to visit https:// myfwp.mt.gov/fwpPub/tipmont to provide details or call the FWP violation reporting hot line at 1-800-TIPMONT. They may be eligible for a cash reward of up to $1,000.