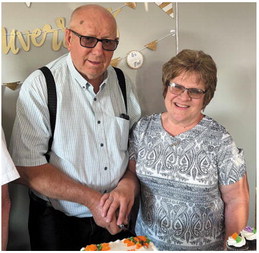 Warren and Dee Fast catered a pulled pork supper as the opening event of the LBA/LCHS School reunion on Friday, July 1. Les Toews (brother of Daryl Toews) of Olympia, Wash., was the emcee at the talent night that followed. Participants included Alan Kliewer of Lustre, Jodi Neufeld of Larslan, Bob Johnson of St. Louis, Mo., Glenda Kreiman of Bloomfield, and Jerry and Debbie Jenex (former faculty) of Arizona, Everly Doolan of Ogden, Utah (granddaughter of Ron Reddig, daughter of Corey and Nicole Doolan), Jodi Neufeld, Amber Reddig and Angie Smith, accompanied by Julie Reddig and Dan Reddig. Also Justin and Ashlee Byers, and students Grace Byers & Ashtyn Traeholt. We appreciated songs like Amazing Grace, I Got You Babe, You Light Up My Life, and 5-yearold Everly’s Jesus Loves Me. Current and former board members of LCHS were honored. The weather was great for the fireworks at night.

Organizers were Randy Reddig, Austin Neufeld, Jean Toews and Gretchen Schiller. Around 200 people attended including Wayne and Joan Olsen of Alaska, Lynn (Green) Radamacher of South Carolina, Elmer and Elaine Wedel of Eden Prairie, Minnesota, Dan and Joan (Schmidt) Anderson of Andover, Minn., and daughters, Kristi and Kathleen, Les and Judy (Schmidt) Toews of Olympia, Wash., George and Dorothy (Reddig) Keyes of Pennsylvania, Lyman Toews, Jason Saukojus, Jeremy Sauskojus, and Jesse Sauskojus and families, Justin and Racquel Skillman of Churchill, Scott and Tracey Svoboda of Oregon, Rome and Roni (Reddig) Legg of Ogden, Utah, Bob and Lavonne (Reddig) Johnson, and other local people. There were others who came for the Saturday events of touring the buffalo ranch, hosted by Lyle and Carla Wall. Recognized as attending from the farthest back graduating class, was Iris (Anderson) Pehan who attended one year in 1951, who came from Spokane, Wash., with her son Lyle and daughter Cynthia. Mr. and Mrs. Elmer Wall of Minnesota, with his brother Waldo (Susan) Wall were also attending, as well as Markand Melanie Erickson of Missoula, Nancy Speers of Gillette, Wyo,. and Allen and Barb Wall, and Waldo & Susan Wall of Wolf Point. Class parties were available Saturday after the track, basketball and volleyball events.

Eldon Unrau, formerly of Lustre, was given an 80th birthday party at his home in Billings July 2.

Brant and Lynn Unrau’s home in Lustre was filled with visitors and family as the community wished “Happy 50th Anniversary” to his parents, Wilbur and Vernelle Unrau and also to Loren and Diane Unrau. They celebrated on July 5. Carrie Downs of Mowequa, Ill., recreated cakes identical to the top tier of the original wedding cakes, as well as many cupcakes in their colors. Joe and Shauna Kukala and family of Newton, Kan.; Chad and Karri Leckie of Summerville, S.C. and Michael Unrau of Colorado Springs, Colo., and Phil and Andrea Paradis of Surprise, Ariz., were home to help host the event. Loren and Diane Unrau were married Sept. 2, 1972, in a double wedding with her sister, Arden and Darlene (Thomas) Unrau.

Marty and Angie Smith hosted an extended family dinner honoring Dean and Julie Reddig, her parents, on their 50th wedding anniversary. They were married June 24, 1972, in Lustre.

Bart and Cheryl Hammond, Karlene Westermeyer, Jim and Kris Trillet, and Michael and Janine Conner of Parker, Colo., came with their father, Karl Waitschies, for their mother Donna’s funeral and burial. Many of the Lustre community attended.

Warren and Dee Dee Fast (daughter of the late Don and Velma Heidner) celebrated their 40th anniversary June 25 by enjoying a day at Medora, N.D. The community also mourns the deaths of Esther Fast and Gladys Fast. Their obituaries appear on page five.