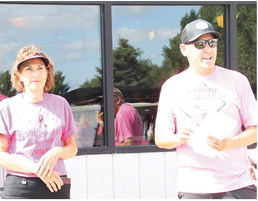 The Stampede Round Up! Tough Enough To Wear Pink golf tournament again attracted a good amount of teams to the Wolf Point Airport Golf Course on Thursday, July 7.

Organizer Jan Bryan explained that the tournament started about 11 years ago. At first, a tournament was held during Stampede week to benefit the golf course. The focus then became a Tough Enough To Wear Pink event.

The tournament raises $1,600 each year for NEMHS’ mammography department.

“About half of the people play every year,” Bryan said. “It’s to raise money and have a good time.”

Dennis Heser has been a participant in the tournament for many years. He usually plays on the same team with Bryan, Billie Brownlee and Dave Fyfe.

He noted that some golfers make teams when they return for their class reunions.

“It’s everybody getting together to have a fun time,”