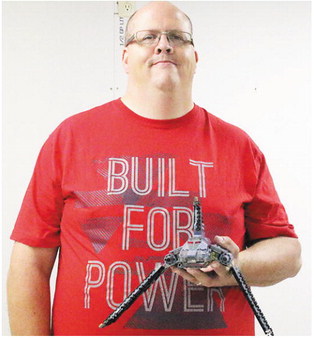 Curtis Mork, known as the Lego Guy, was well received for programs in Wolf Point, Culbertson and Froid during last week.

Mork, who began touring in 2008, is visiting Montana for the first time this year. It’s his 10th state for tours.

“I was supposed to come here in 2020, but then the world went crazy because of COVID,” Mork said. “So far, I love it. I just don’t want to get stuck in any of your storms.”

He was especially impressed that the Culbertson program attracted 77 individuals.

Mork explained that he started getting serious with Legos in 2006 when he was going through medical challenges. He eventually was diagnosed with M.S.

“I was at a local store and I decided to look in the Lego section,” Mork remembered. “As soon as I turned in the aisle, I ran into trouble. I had no idea what Lego was doing.”

Since that time, Mork has built 820 sets in his collection. “And it’s still growing,” he noted.

His three favorites are Millennium Falcon from Star Wars, the Cinderella castle from Disney World and a roller coaster.

“Those sets never leave the house,” Mork said. “They are huge.”

He explained that some sets are made through following the instructions while others are built with his own imagination.

His love with Lego plays a positive role in the life of the Colorado native.

“It’s the only thing, if I’m having a bad day, that I can sit down in my workshop and it calms me,” Mork said. “It puts my mind at a different place.”