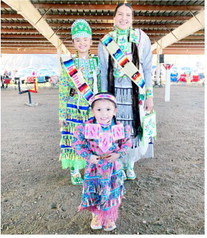 A second grand entry and nighttime program were added to the Sunday schedule. Attendees said the evening performances generally were among the best attended in recent years.

Teen girls’ fancy went to Hally Eder of Poplar. She was followed by Chante Baker and KD Halsana.

Teen boys’ traditional went to Wanbdi Chaske. He was followed by Si-Mis Top Sky of RockyBoy, and Weston Lambert.

First in men’s golden age went to Cody Eagleman of Poplar. He was followed by Ole Greybull, Terry Martinez and Mason Runs Through.

Women’s fancy went to Allison Bearstail of Bismarck, N.D. She was followed by Farrill Top Sky and Karen Noon.