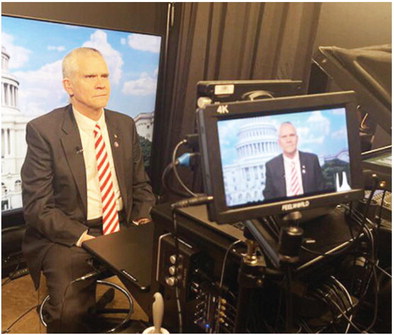 In a primary race that featured three Republicans running to the left of incumbent Congressman Matt Rosendale, the representative defended his seat, crushing the three challengers and winning his party’s nomination.

The Glendive-area congressman will advance to the general election, where he’ll face a different type of challenge.

For the Democrats, Penny Ronning of Billings, a former city council member, won her party’s nomination to run for Congress in the Second District, beating one other Billings’ Democrat, Skylar Williams, and Mark Sweeney, a state senator who died on May 6, before his name could be removed from the ballot.

Ronning and Rosendale will advance to the general election in Montana’s eastern district. Montana became the only state to ever lose a Congressional seat, go back to an at-large district, and regain a seat in the most recent U.S. Census because of population growth. The Second District stretches from the North Dakota border, west encompassing Billings, Great Falls and Helena.

Rosendale and Ronning will also face off against independent Gary Buchanan, a businessman from Billings whose entry into the race could mean that the next representative from the central and eastern part of the state could be sent to Congress without a majority of voters’ support. As of press time, Libertarian Sam Rankin held a lead over two other members of his party, Roger Roots and Samuel Thomas.

Rosendale took nearly three out of every four Republican ballots cast as of press time, with 44,998 votes. The next closest challenger on the GOP ballot was Kyle Austin, a pharmacist and business owner from Billings who pulled in 7860 votes.

“I’m humbled by the overwhelming support from Montanans. I’ve always viewed representing our state as one of the highest privileges. I look forward to the opportunity to once again earn the votes of the people across our state as we move towards the general election,” Rosendale said via Twitter.

By the start of Tuesday, the state of Montana reported nearly 230,000 ballots had been turned in, which translated to about 30 percent of the eligible voters.

Ronning took 61 percent of the Democrats votes for the Second District, with 14,967 as of press time. Sweeney had nearly 5,000 votes and had been in second place for the entire night, edging out candidate Skylar Williams of Billings.

“Our campaign was about Montanans. I was the only political person on the campaign, because this is what it is about: What matters to Montana, not politics,” Ronning told the Daily Montanan on Tuesday evening.

She said the race will now change. In the primary, she said, the challenge becomes representing the party and rallying members to believe you’re the best choice. Now, it will be about specific policies and Rosendale’s record as the incumbent.

“Matt Rosendale has lost before. He’s not God and he’s done such an absolutely horrendous job representing the people of Montana and representing his own party,” Ronning said. “How has Matt Rosendale benefitted Montanans? I mean take a look at his bills and ask, what has he done to impact or benefit the Second District in a meaningful way? He’s voted ‘no’ on everything.”

The Associated Press called the race for both Rosendale and Ronning on Tuesday evening.