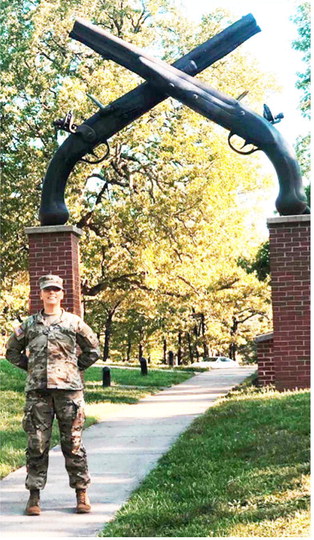 While some of her fellow classmates were thinking about which college to attend, Culbertson’s Cody Larsen was making different plans.

Larsen, a 2021 Culbertson High School graduate, decided a better path for her was joining the National Guard.

She noted that one of the reasons for her decision was the influence of her step-father, Mike Williams, who served as a military police solider.

“He’s been a really good role model in my life,” Larsen said.

An additional factor was the incentive of receiving full tuition for college after graduating from the National Guard. Larsen noted she wanted to be “debt free.”

Larsen added, “And I wanted to serve my country.”

She achieved her goal of graduating from Fort Leonard Wood, Mo., on May 19.

Because of her athletic background, she said basic training wasn’t too difficult for her. One challenge, however, was being allowed to only use her phone for 30 minutes a week during basic training. She used that time to call her mother, Jolene Williams, on Sundays.

“After I made friends and my mind was occupied, it was easier,” Larsen said of not using her phone.

She said the National Guard experience was definitely beneficial to her.

“I feel a lot stronger mentally,” Larsen said. “Some things that seemed hard before are now easy.”

When asked about some of her favorite memories, she describes a day when she, her team leader and another soldier were in a Humvee. A chaplain came over to share three extra doughnuts. Since sweets were generally discouraged, the doughnuts were definitely a treat. “They were very good,” Larsen said.

She said she told others a few small tales about growing up in rural Montana such as having to ride a horse to school and having to pump her own water. She found amusement in seeing her friends’ reactions.

Larsen is among a special few individuals because only .5 percent of the nation’s population steps up to serve in the military.

“I feel it was good that I wasn’t born in a city. Living in the country helped and I had a lot of support,” Larsen said of her decision to serve.

She thanks her mother for being her biggest supporter. An open house is being planned in Culbertson to honor Larsen.

She has been taking on-line classes and will attend North Dakota State College of Science in Wahpeton, N.D., in the fall with the goal of becoming a dental hygienist. She will attend National Guard drills once a month in Fargo, N.D.