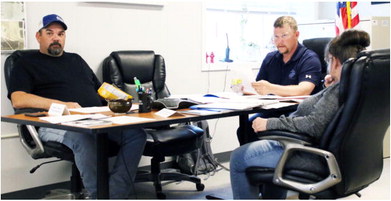 The Bainville Town Council held their regular meeting Monday, June 13. The meeting was called to order at 7 p.m., with council member Nick Tester missing the meeting due to a poor cell connection.

Attendance was high at town hall Monday night. Bree Strickland spoke during public comment about the poor condition of the cemetery. “I was highly disappointed on the way the cemetery looked on Memorial Day,” said Strickland. “Our hearts are broken by the way it looked.”

Strickland added that Memorial Day is the only cemetery holiday on the calendar. She said her family would continue upkeep on family plots. Mayor Toby Romo said there are liability issues but promised a solution or plan action by the next council meeting. “We’re going to find a solution pretty quick,” said Romo.

Romo reported that a representative from the Midwest Assistance Program conducted a water audit. Results indicate that Bainville is losing 300,000 to 400,000 gallons per month due to leaks and possible unsanctioned use. Romo shared safety feedback from the audit and reported progress in the form of newly installed water lines and meters around town. The MAP representative suggested that the city increase its utility billing and recommended cutting and capping the water and sewer lines that run to the McBain Man Camp. The council approved a resolution to remove approximately 40 EDUs from the man camp, reducing the town’s monthly fees considerably for the site.

Building permits were approved for three sites: a fence at 619 Evans Street, a new shed at 308 Tubman Street and 3 Flynn Avenue East.

A new solid waste contract was approved with Bowker Sanitation. Members of the council and the audience said they appreciate the service that Bowker provides the town.

A quit claim deed is needed for the county building/ senior center. Clerk Nikki Rogers said Gordon Oelkers has asked on behalf of Roosevelt County that ownership be settled at the site. Discussions are ongoing, pending research.

The council approved an agreement with Chet Mc-Lean to provide the annual financial report for 2022. The council also approved a fee waiver for the Bainville Community Association in the amount of $25 for their upcoming Heritage America Celebration.

Romo discussed the town’s savings balance with council members. He said fund has been declining by approximately $30,000 per year. He said there is no reason to be alarmed but would like to see the council plan to retain the savings moving forward if possible.

Approval for the amended 2021 budget was postponed. Clerk Rogers said she was up to Feb. of this year on the budgets and expects to have remaining budgets amendments prepared by the next council meeting.

Claims, checks, payroll slips and vouchers were approved, as were minutes for the May 23 special meeting. Romo was approved to sign payroll checks.

With evident goodwill all around, no action was proposed or taken regarding clerk Rogers position with the town.