Reum Commended For Going Beyond Call Of Duty 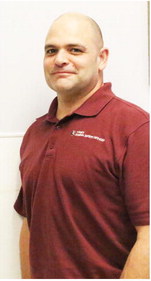 The efforts of Wolf Point’s school resource officer and law enforcement potentially saved the life of a high school student in December.

During the Wolf Point School board meeting on Jan. 17, a letter was read from the Wolf Point Police Department to commend resource officer Corey Reum from going beyond the call of duty during an incident on Dec. 21.

Reum explained that a high school girl injured her knee directly on the railroad tracks. She was laying right by the railroad crossing and was too injured to move on her own.

Wolf Point Chief of Police Jeff Harada, David Dale of the Fort Peck Tribes Department of Law and Justice and Reum assisted the girl off the tracks.

“Within 10 seconds, the train went by at full speed,” Reum said.

He said that he was notified of the situation after a student came in and told office staff members.

“I happened to be at the doors,” Reum said.

He started as the school’s resource officer on Dec. 20.

“I love it,” Reum said of the position. “I enjoy working with kids.”