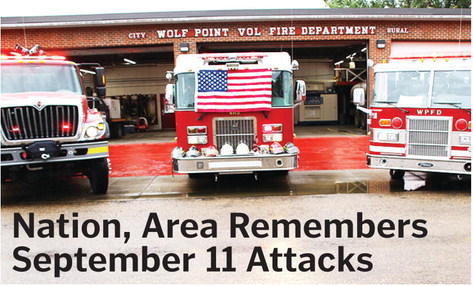 As the nation recognized the 20th anniversary of the Sept. 11 attacks, the area did its part of not forgetting the events of that day. The fire departments in Wolf Point, Culbertson and Bainville each displayed fire engines with flags in efforts to promote awareness. The Wolf Point Fire Department rang the siren six times during the morning in memory of events on Sept. 11, 2001.

In addition, the Medicine Lake VFW Post 8869 presented flags and a moment of silence was conducted prior to the Red Hawks’ football game.

“Twenty years ago today, our country was forever changed as we watched the horrific attacks of Sept. 11th take the lives of thousands of Americans. In the face of tragedy, America showed the world a country united in our values-and we held our enemies accountable,” U.S. Sen. Jon Tester, D-Mont., said in a press release. “Now, we face our most critical task: living up to the promises made to the men and women in uniform who answered the call of duty to defend our nation. As we take on new challenges, let us always remember that we are stronger together, and let’s recommit ourselves to honoring our first responders, service members, veterans, and countless other brave Americans who made the ultimate sacrifice on behalf of our freedoms.”

U.S. Steve Daines, R-Mont, noted, “Today we honor and recognize the 2,977 innocent Americans who lost their lives at the hands of evil in the horrific terrorist attacks on 9/11. We remember the survivors, the first responders, and the families and communities that were broken. We remember the heroes who answered the call to serve their fellow Americans, and we remember those who lost their lives fighting for our freedoms ever since. Despite the tragedy that occurred, Americans everywhere rallied together and we persevered. We are a nation that believes in defending our country and our ideals, especially the fundamental belief of freedom. Our adversaries want us to live in fear, but we will never back down or stop fighting for what we believe in. May today be a day of remembrance and reflection as we go forward with the resilient spirit that has been instilled within us all. God Bless the United States of America.”

U.S. Rep. Matt Rosendale, R-Mont, said, “Like many Americans, my heart still pains when I hear the words 9/11. We as a nation remember the victims of the evil attacks on our country and honor the heroes that emerged that day willing to sacrifice their lives for fellow citizens. We pray for the families of the men and women departed, whose loss and sacrifice has not diminished over 20 years. In the darkest moments of that day, many Americans displayed a boundless courage that shone like a beacon for our nation. We must never forget the bravery of our First Responders, everyday citizens, and especially the self-sacrifice of the passengers aboard Flight 93. It is in these moments, that America showed true strength against the forces that seek to destroy her, something that we must continue to achieve every day. In the face of difficult times, it is the American way to forge a path forward in a spirit of patriotism and of hope. Today, we reflect upon this anniversary of 9/11, recalling the heroic grit that many in our nation displayed in the face of brutal terrorism as a reminder to us all: this is what it means to be an American.”