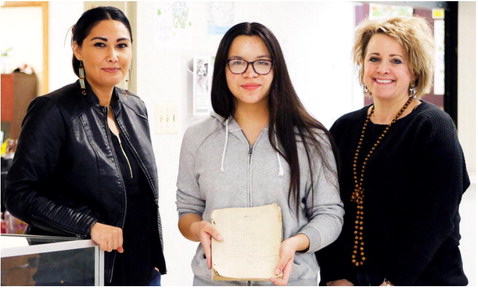 WPHS Native American studies teacher Tressa Welch said the lesson book is on display near the high school office. Welch said the glass case holding the book will be filled with other historical objects and artifacts including obsidian arrowheads, pipestone and a creation story backdrop.

Crawford’s grandmother, Laura Bleazard, told the Northern Plains Independent that Janese was born in Pine Ridge, S.D., in 1879, three years after the Battle of the Little Bighorn. Bleazard said that Janese was around 12 when the Wounded Knee Massacre happened, killing many relatives and scattering others. Janese hid in an unheated basement during a blizzard for three days after the massacre.

“I remember her telling me how frightening it was,” said Bleazard.

Janese made her entries by hand in the lesson book at Carlisle. She graduated from the school in 1902 and would go on to work in nursing and teaching in North Dakota, Oklahoma and the Wind River Reservation in Wyoming, as well as working at the hospital and nursing homes in the Poplar area.

Bleazard said that Janese had “scary stories” to tell about life at Carlisle. She said Janese endured lye showers and beatings whenever she spoke Lakota. Despite the indoctrination, she continued to speak her native tongue throughout her life.

“She always looked around to see who was listening when she spoke it,” said Bleazard.

At Carlisle, said Bleazard, school staff cut Janese’s hair, made her change into conventional clothing and forced the students to speak English exclusively. Other family stories include a quilt Janese made at the school out of silk ties, one of which belonged to fellow student Jim Thorpe.

Bleazard said Janese never returned to live at Pine Ridge, but stayed involved in reservation politics and helped with the Wheeler- Howard Act, which passed in 1934 granting Indians the rights to govern themselves and retain their historic culture and traditions. Janese died in 1990 in Poplar at the age of 90.

Janese was keen on college and ongoing education. Bleazard said she received weekly letters throughout college from Janese, her grandmother, right up until the week she died. “She told all the children that they had to get an education,” said Bleazard, “because the government can’t take it away.”

Janese’s lesson book is on display now at WPHS and may be viewed without an appointment. Welch has asked that families in the area reach out to share other historical artifacts with the school. For more information, call 653-1200.