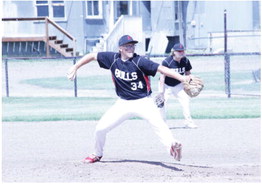 The Sacred Heart Catholic Church of Bainville celebrated a century of the existence of its church building during a recent special mass.

Because the Feast of the Sacred Heart of Jesus was recognized on Friday, June 19, local church leaders decided to have the 100th building celebrated that day. After a special mass, there were cookies and punch offered to participants.

She explained that Rev. J.H. Mahuisser founded Sacred Heart Parish in Bainville during 1909. They started holding worship in a different building. The Parish became a mission of St. Anthorny's in Culbertson in 1911.

A church was brought in from North Dakota in 1911. 'They sold that building and moved into this one.' The current church was built in 1920 in the pastorate of Rev. William O'Rourke of Culbertson. The church was built just to the south where it sits now.

After troubles with the basement, a new basement was built and the church was moved unto it. The foyer was added in 1960. About 30 years ago, Mark and Wayne Picard painted the inside and outside of the church.

Other changes during the years included the altar being turned to face the congregation, a new floor for the basement, the painting of the wall behind the altar and a tin roof. Romo said, “In 2019, with the help of some generous donors, we had the outside of the church painted. We had lost the horizontal arm of the cross on the peak of the church so it was replaced by two young brave souls, Jess Romo and Dustin Harmon, who climbed way up there to get it done. They were assisted by Lawrence and Lee Romo, safely on the ground.”

Father Patrick Etuk has been serving the churches since early this year.