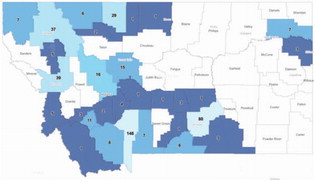 Montana Governor Steve Bullock said Monday, April 27, “We’ve officially started Phase One of Montana’s gradual reopening. But let me be clear: we could be in this first phase for a long time. We will not move out of Phase One if the curve doesn’t remain flat.”

For up-to-date information on COVID-19, go to dphhs.mt.gov.

When making the appointment, the department will arrange the time and will have a staff person at the designated door to escort the member of the public into the building. To the greatest extent possible, the public is encouraged to conduct business online, by telephone or by fax. The phone number to the main switchboard and all departments shall be posted on all doors.

According to Tribal Executive Board member Kaci Wallette, restrictions and guidelines set in place by the Fort Peck Tribes will remain in place past the date for easing restrictions set down by Governor Bullock.

“We are staying closed tentatively until May 22,” said Wallette. “All our tribal restrictions will be in place until then.”

Wallette confirmed that curfew, shelter in place and state of emergency orders will remain in effect. Non-essential enrolled-member- owned businesses like casinos will remain closed. Wallette added that May 22 is a target date and may change.

“If we have no new cases for an extended period of time, we will do a phased re-opening before that date and, if we have an influx of new cases, it will be after that date.”

the following press release April 28: “The Wild Horse Stampede is on schedule and planning to be held July 9-11; however, we are closely monitoring the current regulations from Gov. Bullock’s directives and the local health department. We will be making a final decision by June 1 according to the most updated directives.”

Under Bullock’s plan, public school districts could open for classes May 7, three days after the deadline MHSA had set earlier of Monday, May 4, for students to return to classes, which was a condition for activities to return with shortened seasons.

This cancellation, a health and safety decision related to the COVID-19 pandemic, is the first time in 77 years, since 1943, that Montana has canceled a sports season.