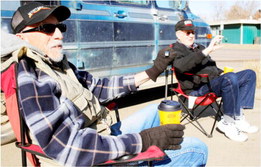 Retired cook Ron Wells (left) and retired music teacher Dwight Larson adjust to social distancing measures during their morning coffee routine at McDonald’s in Wolf Point March 30. Wells and Larson were joined by retired postal workers Richard Ferguson and Milt Berglee. According to Wells, regulars Ken Wylie and David Arndt had already come and gone. McDonald’s staff have been keeping the retirees supplied with hot drinks while the group relaxes in the restaurant parking lot, six feet apart. Passersby honked and shouted encouragement. Ferguson told the Northern Plains Independent that the full group typically numbers as many as 15 to 17 people and the group has met daily for years. He said many attendees are out of state for portions of the winter.