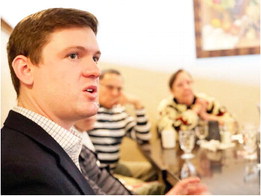 Democrat Raph Graybill visited Wolf Point’s Sherman Inn Sunday, Feb. 16. The candidate for attorney general has pledged to back Montanans on health care prices, in the fight against methamphetamine and for clean, open government.

Said Graybill, “Montana has a proud history of fighting for clean, fair, transparent elections. Our elections should belong to the people, not big corporations or the highest bidder. In 2018, I took the IRS to court and won after they tried to make it easier for dark money groups to hide their influence in our elections. We sued the IRS in federal court in Great Falls and won. I’m also proud to have written Montana’s ban on foreign influence in our elections.”

If successful in the primary, Graybill will face the victor in the GOP contest between former House Speaker and current Roosevelt County Attorney Austin Knudsen and Assistant Attorney General Jon Bennion.