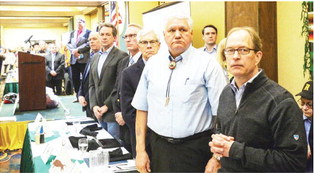 A large crowd gathered at the Holiday Inn to celebrate finally becoming the nation’s 574th federally recognized tribe. During the dinner, chairman Gerald Gray recognized the many people who have fought for federal recognition over the years.

The tribe has been seeking federal recognition for over 150 years and began petitioning the federal government in the 1930s for a formal reservation and to be allowed to organize under the Indian Reorganization Act of 1934.

According to the tribe’s website, “The name of the tribe is: ‘The Little Shell Tribe of Chippewa Indians of Montana,’ and it is often shortened to ‘Little Shell.’ The name ‘Métis’ (pronounced may-tee) is often used, meaning ‘middle people’ or ‘mixed blood.’ The term Métis or more correctly Métifs, was first used during the 18th and 19th centuries, but at that time it identified a specific northwest society with its own culture and economic traditions, living in the areas of the Red River, the Saskatchewan River, Turtle Mountain, North Dakota, and the area of present day Winnipeg and Pembina, North Dakota.”

The current population of enrolled tribal members in Montana is over 5,400. The tribe maintains an office in Great Falls. The Métis number in the thousands in the United States and south central Canada, and there are many unenrolled Little Shell people in Montana.

“In the mid 1800s, the tribe was numbered at several thousand in the Red River-Pembina region,” states the website. “At that time, there was no formal enrollment procedure, no reservation and thus no documented population figure. After the 1892 renegotiation of the Treaty of 1863 (the infamous 10 cent treaty), many of the Métis, including the Band of Chippewa under Little Shell, were left without a land base or reservation and many became nomadic.