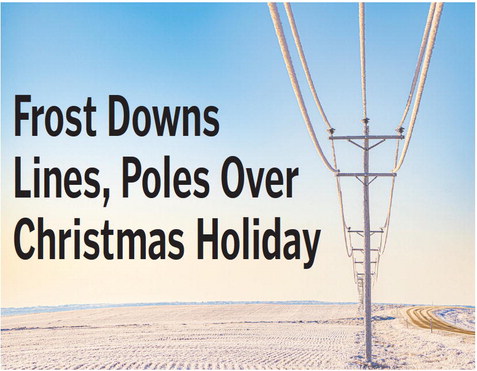 Sheridan Electric Co-op representatives told the Northern Plains Independent that customers affected by outages numbered in the hundreds over an area ranging from Scobey to Alkabo, ND.

Norval Electric Co-op general manager Craig Herbert said that nearly the entire former Northern Electric territory went down after poles and transmission lines snapped under the weight of heavy frost. Service to all critical NorVal users — mainly private homes — was restored by 4 p.m. Dec. 27. Herbert said as many as 400 users were affected system-wide. At press time, he said electricity remains out for some stock wells and abandoned areas, but said crews will be addressing those issues over the next few weeks.

Social media posts about abbreviated holiday hours from both cooperatives quickly turned to reports of outages by nighttime on Dec. 24: “We are experiencing outages west of Plentywood, south of Plentywood, and along the R-Y just south of our Pleasant Prairie Substation,” said a Christmas Eve update from Sheridan Electric posted at 10:30 p.m. “With heavy frost and winds picking up, we appear to be having issues with broken wires. We have two crews of linemen working hard this Christmas Eve for you.”

By 9 a.m. on Christmas Day, Nor-Val posted the following: “Crews are battling heavy frost on the lines caused by the fog over the last week. We have a crew in the Opheim area working on downed transmission line north of Edward’s road. Members fed out of Opheim, Schuster, Peerless and Kronebusch subs are affected by this. The frost has been breaking lines and poles around the system. Also crews are in the Lustre area are battling frost, downed power lines and poor visibility.”

Herbert said he could remember similar conditions causing havoc during the winter of 2009-2010. “At that time,” said Herbert, “the problem was poles snapping. This time, we only had seven poles snap, but roughly the same number of users were affected.”

Herbert and Sheridan Electric representatives said moisture and wind were the primary problems.

Cory Mottice, lead meteorologist for the National Weather Service in Glasgow, said that a strong inversion combined with low temperatures, a low cloud deck, some snow pack and moisture in the air caused fog to remain longer than usual, allowing it to freeze. He said frost from trapped fog is common in the valleys and lower areas, but that a cap of warm air from Canada held conditions in place long enough to cause significant problems.

Nearly all available NorVal and Sheridan linemen worked the maximum allowable hours over the holiday. Sheridan Electric said crews rotated to keep at least one active team in action at all times despite mandatory rest periods.

Representatives from both cooperatives encouraged readers to stay away from possible electrical hazards and to report all outages immediately.